Winterbourne House and Garden is an Edwardian heritage estate built in 1903 as a suburban home for Birmingham’s industrialist Nettlefold family who made their fortune in screw, nut and bolt manufacturing.

The seven acre garden was designed in the Art

and Craft style by Margaret Nettlefold under the inspiration of Gertrude Jekyll. It was later expanded on by John MacDonald Nicholson who added features such as the alpine scree and rock garden before bequeathing the house and grounds to Birmingham University in the 1940s.

I visited on a sunny Saturday afternoon in early spring and explained at the shop about what I was doing and asked whether a gardener might be available to see me. The curator contacted the gardener who was on site via walkie-talkie and before long I was speaking to Leanne.

After I explained to her about [25] Pockets of

[Birmingham], she kindly took me on a garden tour of the walled kitchen garden, orchid hothouse, arid house (full of cacti and succulents), alpine glasshouse and alpine scree

garden and rockery, pointing out herbs and

specimen trees of interest and some of the garden’s prominent and long-standing features – such as the Nut Walk of coppiced hazel cultivars. 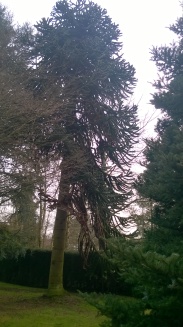 I asked Leanne if she has a favourite shrub or tree and she brought me to see the garden’s Monkey Puzzle Tree – a species endangered in its native Chilean habitat. She told me that the common moniker derives from the peculiar shape of the tree that caused a Victorian cultivator of a specimen to quip that “it would puzzle a monkey to climb that.”  She informed me that Britain was once forested with a similar variety of tree and that Whitby Jet is

fossilized Monkey Puzzle wood, compressed over millions of years. She then drew my attention to the seeds strewed beneath the tree and I learned that indigenous peoples in Chile used to grind the seeds into flour to make a type of

bread and also masticated and fermented the seeds to make an alcoholic brew.

The garden tour continued through a phd student’s project – “Ovid’s garden” of Mediterranean plants and then Leanne showed me the newly planted lime walk of pleached lime trees, pulling back

the turf near one of the trees to reveal the rotting residue of decaying trunk from the single lime tree that used to dominate the walk before it began to die and had to be cut down.

Back at Winterbourne House, Leanne showed me the gnarled stem of the 100+ year old wisteria embracing the redbrick building’s south face and told me that she is currently engaged with pruning its whippy growths to encourage flowering.

For the assemblage she gave me a twig from the wisteria she is pruning and some monkey puzzle tree seeds.

Pocket Number 20: someone (Kat) in a narrow boat (“Victoria”) at Gas Street Basin >>