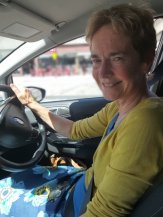 I emailed Jenny about what I was doing and we arranged a time and day to meet.

A tree had fallen onto the tracks again, delaying my train but Jenny waited for me to arrive and picked me up at the station and we went to admire her front garden. 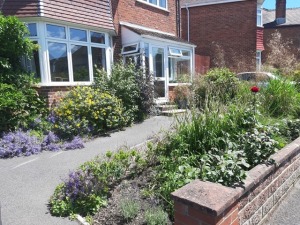 The spring flowers Liz saw were all gone but St John’s Wort, roses and bellflowers bloomed instead. Jenny had rooted out weeds and trimmed the hedge and everything looked splendid. She said her garden was professionally landscaped to provide year round interest with easy care 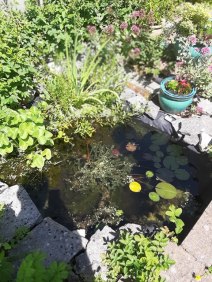 In Jenny’s back garden is a patio, lawn, rockery, and a pond 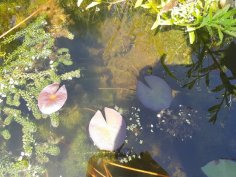 There are two newts hiding in this photo along with a pond skater.

which accommodates newts – I haven’t seen newts since I was a child.

Jenny keeps busy in retirement: gardening, painting, travelling and training for triathlons. Her husband sings with the Southampton Philharmonic Choir and was out rehearsing Verdi’s requiem for a 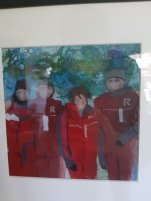 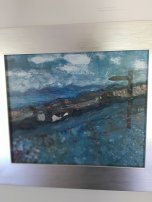 Here are some photographs of paintings 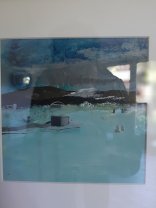 Jenny’s painted of a trip to Iceland. She incorporates meshes and fabric into her paintings’ skies to give them depth and texture. 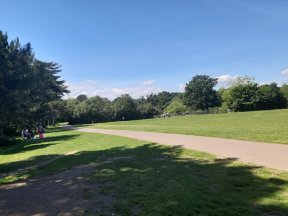 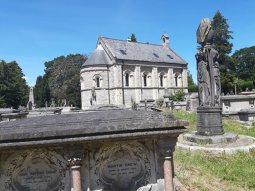 the cemetery grounds, wildflowers bloomed between the gravestones, and we visited hidden areas 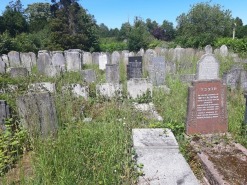 such as as a Jewish burial ground behind a Jewish chapel.

There are plenty of stories to uncover in the cemetery  and Jenny recommends booking a guided tour with Friends of Southampton Old Cemetery, a  group of enthusiasts who care for the plots and headstones and are  knowledgeable about the 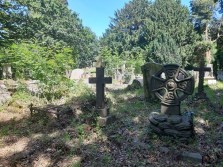 cemetery grounds and the people buried there. 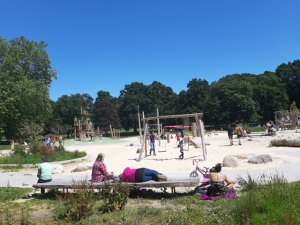 Jenny said she used to take her children to play in the common and regularly walked the dog there. These days she uses the paths for interval training for triathlons.

By the time I get around to publishing this, Jenny hopes to have done a triathlon in Romania. It will proceed beneath blazing midsummer continental heat and so she hoped it would be organised similar to one she did in South France where she could get splashed down with water every few miles to cool off.

…Also, the race results from the Lakesman Half are in! Liz did it. She’s a Lakesman. Jenny showed me a video of Liz smiling from ear to ear and soaking up applause as she ran across the finish line. 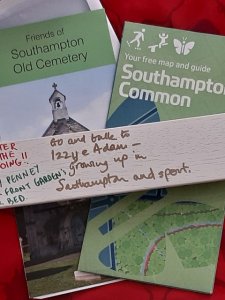 Jenny gave to the assemblage brochures of Southampton Common and Southampton Old Cemetery and wrote (with a golden pen) for me to go talk to Izzy and Adam about growing up in Southampton and sport.

Pocket Number 24: Adam and Izzy at The Pig in the Wall >>