Band on the Wall is Manchester’s oldest music concert venue, hosting performances of up-and-coming and well-known musicians from across the musical spectrum.

I arrived at the venue’s Picturehouse Bar on

a Sunday evening and met Tom, Mike and Jo and passed on to them Sarah and Molly’s message (tell them they’re awesome – like us).

I had a pint of Old Git and a bowl of fish curry.  The curry came with fresh mint raita and coriander chutney. 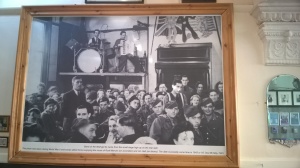 Framed and mounted next to where I was seated was a large poster of a photograph taken sometime in the 1940s. It shows a band sitting on a shelf on the wall; playing above the heads of World War II servicemen. The photograph answers the question of how Band on the Wall gets its name.

Tom also informed me that the BOTW’s spaciousness resulted from the amalgamation of various buildings, including a historic beerhouse and brothel likely to have been visited by Marx and Engels. 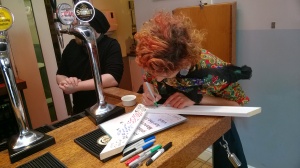 George Fell and his supporting artists setting up for the evening’s gig.

I had explained to Tom, Mike and Jo about what I was doing and Jo gave the assemblage a ticket for FAB Radio presents A Bunch of Five , which had taken place on Saturday.

Jo then wrote on the frame for me to “go to the Wonder Inn on Tuesday and dance at the ceilidh!! Eat some delicious organic soup and say hello to all the beauties there!“