[25] Pockets of [Brighton & Hove] uses an art assemblage to explore Brighton and Hove and the connections between people working, visiting and living there.

Participants give away to the project’s collection an object possession and then write on a picture frame, directions for the next location and person, or ‘pocket’ to be visited in Brighton. The trail of referrals from person to person continues until at least 25 objects from 25 referrals have been collected. The collected objects are later incorporated into a final, framed montage.

To begin my journey I stood close to where

googlemap planted it’s pin for Brighton , near the minarets and exotic onion domes of Royal Pavilion.

At my right, couples and families entered and exited from the Royal Pavilion Ice Rink.

At my left, a man hand-fed crumbs to pigeons.

Opposite me boys chased an urban fox round and round some bushes.

I held up my sign ‘name a person in a place in Brighton for me to visit.’ Later, I realised the sign should have read ‘Brighton and Hove’ – Brighton isn’t just Brighton anymore.

Before too long Sandra and Liz approached me in response to the sign.

Sandra and Liz are married. They said they’re originally from London but moved down to the area and have been living in and around Brighton for 9 years. Sandra does occupational therapy and Elizabeth is a tutor and events director.

I gave my spiel about what I was doing and they sent me to meet their Labour MP, Peter

Kyle. We were in the middle of a general election and I asked them if they were politically active. They said that it’s getting to where we have no choice but to be.

As Parliament is disbanded for the general election, Peter Kyle isn’t technically a MP. Let’s hope he gets re-elected so I can keep to the instructions I was given! 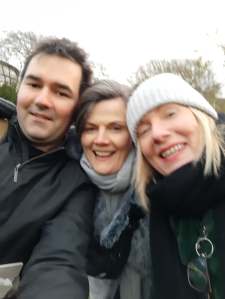 so chased after them and got this selfie.

A few weeks later Peter Kyle MP was reelected. I emailed him about the project and asked if we could meet up. His secretary’s reply was very nice but the email contents are stated to be protected by Parliamentary privilege, so I can’t report on it  … hopefully I’ll get to meet him sometime in the future. In the meantime, nothing has been written on the picture frame yet, so it’s back to square one to originate another [25] Pockets of [Brighton].

I stood at the same spot as before. This time I held up a sign which included Hove.

Another couple, Mr and Mrs Mcardle, approached me in response to the sign. I explained about what I was doing. Mrs Mcardle used to be a history teacher and is well versed in Brighton’s fabled past. She wanted to introduce me to a Brighton character and so  sent me to find the home of 18th century celebrity bather, Martha Dunn, and told me to visit her gravestone as well.

Finding Martha’s house was easy enough, but only because Mrs Mcardle took us there. A faded blue plaque on the wall inside

a closed-down Patisserie Valerie confirmed we were at the right place.

The house’s location would have been ideal for Martha, situated close to the sea and also just around the corner from the Pavillions.

But more about Martha later.

Mrs Mcardle didn’t specify exactly who to see next but mentioned she was curious whether the proprietors of Gunns Florist are descendants of Martha so I decided to go to Gunns Florist next and meet someone there.

Pocket Number 2: Slyme and Twydall [propping up the bar] at The Great Eastern >>