I landed in Tottenham during match day – Spurs playing against

Crystal Palace. Roads were empty and filled with police vans.

I found a TV in

a flag and scarf festooned spurs supporters only fan-pub on which I watched the remaining match. 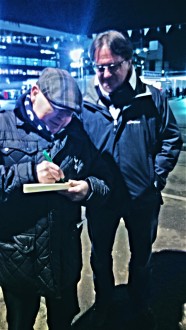 The game was a bit dull, ending in a 0-0 draw but soon the street outside the boozer became lively as thousands of Tottenham football fans streamed out  of their stadium to repopulate Tottenham

I managed to stop a fan and explained to him about the project. He proceeded to give the montage his match ticket and recommended I go see the exhibition at Imperial War Museum.

I was left free to see anyone there.