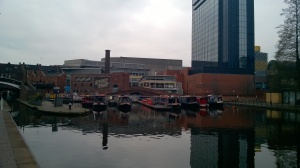 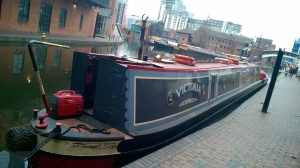 transported there by narrow boat via Britain’s extensive canal network which stretched from the Pennines to London.

The prioritization of the basin for gas street lighting indicates that the basin must once have been the premier economic trading hub of Birmingham before railway technology made transport by canal obsolete. 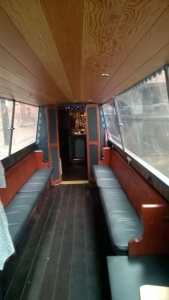 As I strolled along the dimly lit towpath a narrow boat called Victoria chugged up alongside me, trailing a whiff of disco music in its wake. It moored just before Broad Street Tunnel and unloaded its cargo of hen party revellers onto the wharf-side. 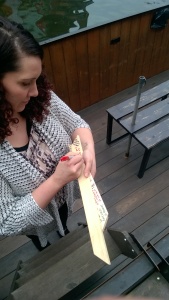 Kate captains Victoria and together with her sister, manages the family business Central Boat Parties, which caters for cruises and parties on the canals.

On-board, Victoria has a bar, sound system and disco lighting.

After I explained to Kate about what I was doing, she sent me to go and find her sister Jenny on the business’ sister-ship called Frederick and told me to “tell her to give me a drink on the house/boat.”