Northern Soul Grilled Cheese is situated beneath the arched roof of a converted market stall. Its interior is made urban rustic with wood and plywood surfaces, stools on segments of universal steel beams, chalked menus on slate, light bulbs hung in graters, etc.

At the open plan griddle area I watched as grillers made

I asked the woman taking orders what she’d recommend and

tried the fresh tasting “Russian,” with roast ham, Russian dressing, maple-glazed beets … and cheese! It arrived with a gherkin and a side of apple and red cabbage slaw plus I was given a can of cola on the house. 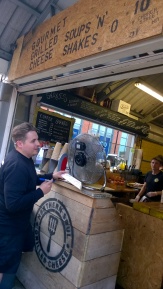 Dan started the business about a year ago and it’s popularity has resulted in it being nominated as finalist for Cheap Eats Venue of the Year 2016 at the Manchester Food Awards.

I explained to Dan about what I was doing and told him that Nico wishes him luck at the awards. Dan gave the assemblage a paper take-away bag stamped with the Northern Soul Grilled Cheese logo and then sent me to Pancho’s Burritos near Oxford Road for a mega burrito!!