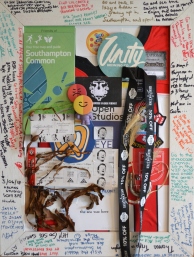 [25] Pockets of [Southampton] uses an object assemblage to explore Southampton and connect between people working, visiting and living there.

Participants give away to the project’s collection an object possession and then write on a picture frame, directions for the next location and person, or ‘pocket’ to be visited in Southampton. The trail of referrals from person to person continues until at least 25 objects from 25 referrals have been collected. The collected objects are later incorporated into a final, framed montage.

To begin my journey I stood inside Bargate

gatehouse, the historic entry portal to Southampton’s medieval walled town. To my right hulked Bargate Shopping Centre: derelict, boarded up and scheduled for demolition.  To 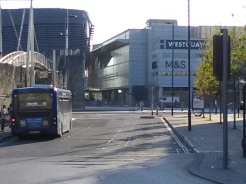 I held up my sign “Name a person in a place in Southampton for me to visit“. 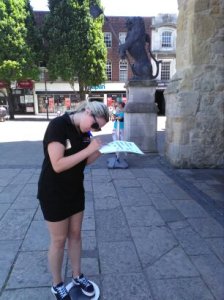 Holly was the first person who approached me in response to the sign. She told me that she’s  recently moved to Southampton from Portsmouth. She works as a sales rep for a paintball company and enjoys dancing. She started off [25] Pockets of [Southampton] by sending me to go get a pretzel at the pretzel place at Westquay and said that vanilla is the best flavour.

Pocket Number 8: Luke at The Hobbit >>

Pocket Number 24: Adam and Izzy at The Pig in the Wall >>