When I visited at The Whitworth, a festival of music, performance and workshops was underway in the park, celebrating the unveiling of a permanent public sculpture by Anya Gallaccio. The sculpture reconstituted in steel the ghost of a tree that had been felled. 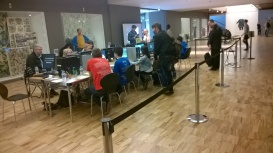 At the Gallery’s Grand Hall children were seated around computers playing Minecraft together.

In the Landscape Gallery I wandered through Nico Vascellari’s sound, mirror and shadow installation. The exhibition was titled ‘Bus de la Lum’ and took as its theme

the folklore, mystique and dark history of a dense patch of Italian woodland.

Exhibitions on the first floor were themed around post-war interior style and design. Featured was a Libor Reich retrospective plus a collection of wall-papers from the

YOU SAW A WAY TO SURVIVE AND YOU WERE FULL OF JOY.” It took inspiration from horizontally constituted things states and appearances and displayed work from artists, such as Katrina Palmer, Andy

After touring the gallery, I asked Dominic at reception where I could locate the Blake

exhibition as I hadn’t chanced across it.

Dominic told me that the Blake exhibition had ended

a month earlier. The current exhibit was titled “visions from the front” and remembered the centenary

of the Battle of the Somme via work from world war one artists, such as: Paul Nash, Henry Lamb, James McBey, David Bomberg, Christopher Nevinson and Frank Brangwyn.

I told Dominic what I was doing and he gave the assemblage a brochure for the Warp festival underway in the park and then sent me to go to Home for a pint of IPA and said to ask the staff there for my next mission.