The Camden Eye sits just opposite Camden’s tube station, in 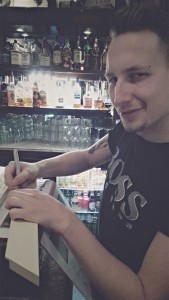 the centre of Camden Town.

There are live music events and sports is shown on a large screen TV.

Waiters floated wood-fired pizza saucers under my nose and the pub had a good selection of real ale on tap – including it’s own house ale – so I had a pint. “The Camden Eye” is described as: “full

bodied, dry but spicy with a creamy head and hoppy finish.”

I explained about the project to James and received a kiss and a Camden Eye Ale beermat. James then sent me to see his girlfriend, Lydia, at Topshop on Oxford Street.

The next day I attended at the mammoth Oxford Street Topshop store but was told that Lydia was off ill.  I was only able

to visit London again, some weeks later, and when I asked after Lydia, was told by Lydia’s former colleagues that she had just recently left her job at Topshop.

I returned to James and asked him for further instructions and he sent me to find Lydia at her new job at the estate agents, James Anderson at their East Sheen outlet.