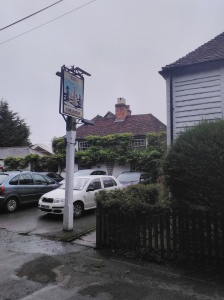 The Chequers Inn is a traditional white and wood beam pub found in an area of New Forest known as The Salterns.

I sat in the sheltered courtyard outside and tucked into a 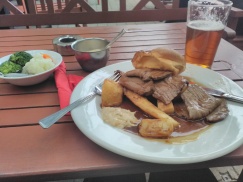 Fathers and their club-jerseyed sons were at the table next to me. One of them noted the size of my Sunday Roast and joked “are you sure that you can eat it all?”

I told them that they all seemed rather friendly and then launched into my spiel, 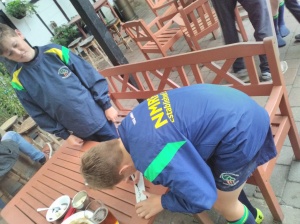 explaining about 25 Pockets of Southampton and asking if any of them would tell me a person and a place in Southampton to visit next.

As I hadn’t been to see the shore yet, Ben told me to source some seaweed from there for the montage and then sent me to see anyone at Thomas Tripp in Lymington. Ben delegated the task of scribe to Tom, his son.

While Tom wrote out his dad’s instructions on the frame I asked him whether he had been playing rugby or doing boring training. His dad interjected. “What do you mean ‘boring training’? Training is fun!” 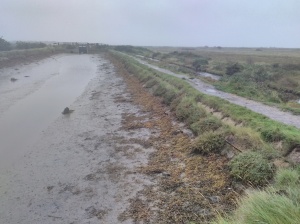 Salt making has been an industry in Lymington from before Roman times up until the 1860s.

The old salt pans are now a nature reserve for wetland plants and animals.

I took  a walk along a footpath over tidal 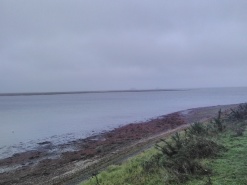 sluices; a mosaic of ditches, 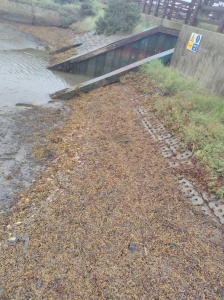 ponds, brackish lagoons and salt-marshes until I arrived at the seawall. Along the way I collected a variety of 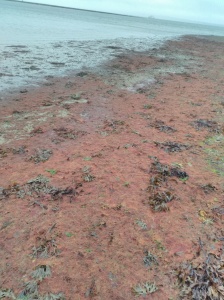 After returning home later, I dried the seaweed on my radiator at home. My housemate noted that ocean is only a good smell when you’re at the ocean because there’s usually a breeze by the ocean that blows away the smell of the ocean.