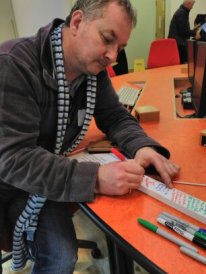 For most of the year Richard runs his family’s business, a test and measurement equipment dealership called Telnet.

However, in December, he transforms into Father Christmas and makes appearances all over Coventry and the surrounding area.

I found pictures of the event online. 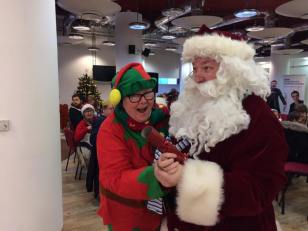 Here’s one of Father Christmas dancing with a Christmas elf who looks like Vic Minett.

After I explained to Richard about what I was doing, he gave the montage a Coventry City Former Players Association pin badge. Richard’s wife is CCFPA’s Membership & Committee Secretary.

He then sent me to meet Clive at Coventry Transport Museum.

Richard told me his favourite vehicle at the museum is The Sky Blue bus, a Daimler fleetline bus which carried the Sky Blue team on their victory parade after winning the FA Cup against Tottenham in 1987.